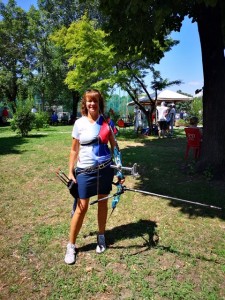 What got you into shooting?

In 2007 my son, aged 13, expressed an interest in having a go at archery. We regularly drove past the outdoor ground of Mayflower Archers in Billericay and could see club members practising. When I asked to book him in for a beginner”s course and was told that an adult must stay with the junior during the three sessions, I decided, on the spot, to do the course too!.……..The rest is history!

I have been lucky enough to have achieved many things in Archery but I think the best, and most surprising, was to achieve GMB in 2008, my first year of competing, which lead to my being selected to shoot for England in the indoor home nations in January 2009, about 18 months after first picking up a bow!

What is the best part of Archery, for you?

The best part of archery, for me, has been and still is, meeting people, including my wonderful husband! We met at local archery competitions, when I began competing and got together in 2008, marrying in 2012.  We have both made many new friends, both at home and abroad, through Archery, and I’m sure they will remain in our lives in the future.

I love competing too and have tried all types of competition.

What are your current achievements?

This year has been a great year for me, I have achieved many things. 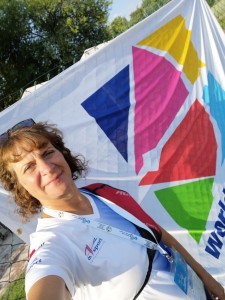 Last year was the first time that I had competed outside of the country when we attended the first Masters World Archery Championships in Lausanne, Switzerland. This was an amazing experience and encouraged me to enter other international events, especially those for masters.

In Lausanne I qualified 6th in the ranking round and finished 8th in the head to head rounds. The indoor round was a combined WA 25m and 18m and I achieved 5th position, just four points away from a bronze medal.

Earlier this year, in March, we travelled to Rome and I won the masters category indoor WA  combined 25m-18m.

In July we again travelled to Italy, this time Turin, to take part in the European Masters Games. This time I came 4th in the ranking round and finished 4th after a one ar

row shoot off for bronze, knocking out the Italian champion to get to that match (probably my greatest achievement this year!) In Turin I also took part in my first international field event, 12 marked and 12 unmarked targets managing a 5th place.

What are your goals and ambitions?

I am working hard to improve strength over the winter season, with the help of my amazing coach, Matt, and the support of Aim4sport. I have several goals and ambitions for the future. My goals indoors are to shoot a 585+ Portsmouth, 570+ triple spot and looking to the outdoor season, next year, I want to break 1300 for a 1440 and gain GMB.

Looking further ahead I want to come back from the World Masters Games, in Japan, with a medal!!